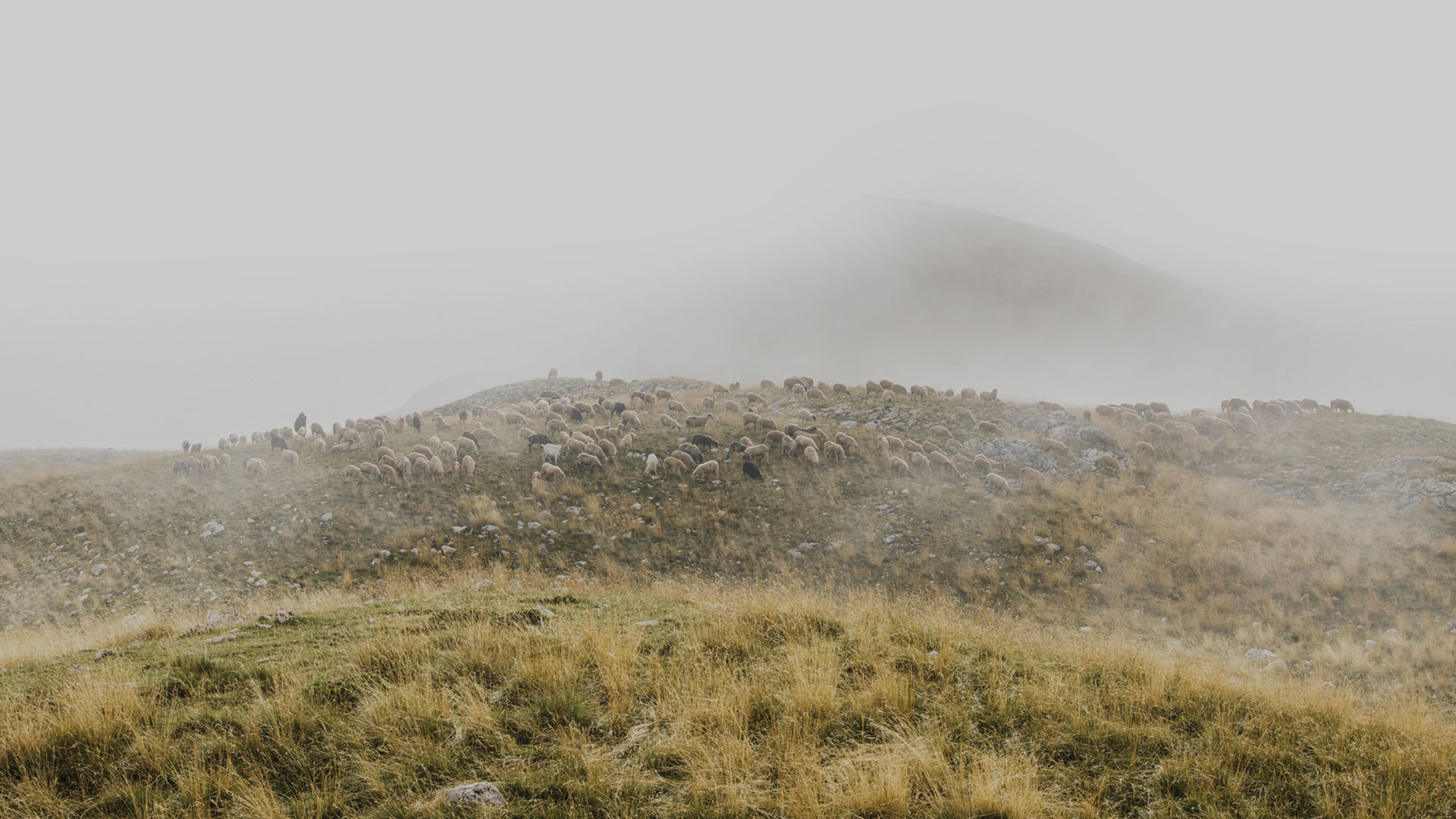 The knowledge and skills of generations, since 1991

"We believe in the source of the ingredientes, continuing deeply committed to a continuous preservation of quality to preforme a genuine product." 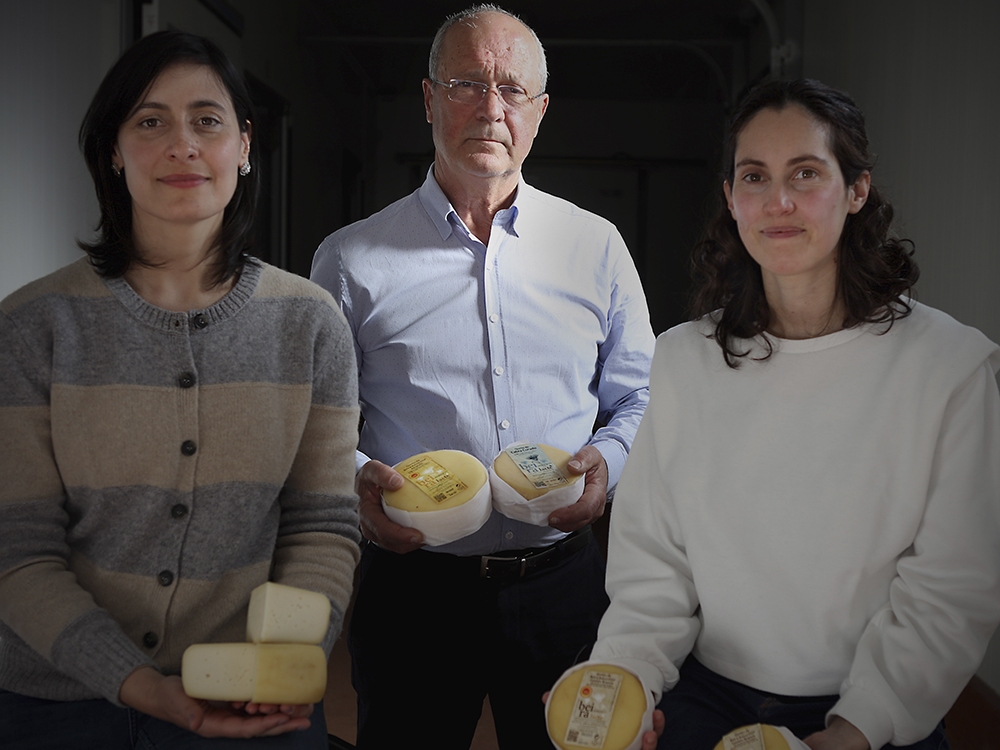 The BeiraLacte, Lactícionios Artesanais da Beira Baixa Lda. is a company located in the municipality of Fundão, in the demarcated region of Beira Baixa cheese.

The owners of the dairie are descended from families of Cova da Beira region, and it produce cheese since 1991, combining modern quality control standards to art and knowledge of generations.
“It all started with the family's patriarch, Dona Conceição, who bought fresh cheeses from farmers and cured and transformed them in her cellars with her knowledge, and then sold them in the region's markets. His son, Carlos Godinho, following her footsteps, began as her, however, with time he realized that if he produced the cheeses himself from the beginning, he would be able to better control the whole process, and then obtain a product of higher quality, having started in 1991 what would be the initial structure of Beiralacte.”

The Beiralacte serves yours region, constituting itself as an engine of publicity of the good things in Beira Baixa. The excellence runs in our veins and the development of the surrounding social, cultural, economic and environmental represents our mission.

"Only the closeness and affection of our collaborators can transform the best milk into the best cheese, one that is genuine, traditional, of great quality and with an excellent taste. The entire process is carried out by hand, from salting to washing and curing the cheese."

So, believing in the quality of the ingredients, we remain deeply committed to a continuous preservation of the excellence, for making a traditional product, without neglecting the focus on food security and improvement of service delivery.

Regulated by the Ministry of Agriculture, Rural Development and Fisheries, as a Class C establishment for the production of Cheese and Curd in the veterinary registration ILT P 704 EC, the Beiralacte offers exceptional facilities for production, curing and storage, and vehicles and have especially equipped to transport their products to anywhere in the country and abroad.

PDO is the denomination that authenticates that these are genuine products originating in a certain region, in this case from Beira Baixa, which, due to their geographical and human characteristics, give rise to a specific product where tradition and perpetual know-how are maintained.

Why our cheeses are so special

This is a traditional cheese from our land, especially on the slopes of our mountains (Pinhal Interior). It was almost lost in the last half century due to the abandonment of grazing goats in this area, a practice difficult due to the relief of the region. Recently, the know-how of generations was recovered, and Beiralacte understood that a product of such high historical value as well as quality and organoleptic differentiation could not be extinguished.
Today Ripened Goat Cheese is produced by the same breeds of goats that in the past grazed on the hills, well adapted to the irregularities of the mountains and valleys that characterize Cova da Beira. It is the slopes of Serra da Estrela and Gardunha or the banks of the River Zêzere (which rises in the heart of the largest mountain range in Portugal - Serra da Estrela) that produce the vegetation that feeds the goats, which give rise to the tastiest milk, for produce this unique cheese.
The cheese is then salted with sea salt, caught in the Atlantic Ocean, in the towns of Nazaré and Figueira da Foz (Portuguese beaches). Then it goes through the hands of the ladies of this land, who caress it until the end of its cure of at least 40 days.
This is a cheese proof of the memories of the interior of our country, of this land of strong people, who conquered the mountains to enjoy their green fruits, which feeds their body and soul.

Whenever in our land cheese was made in excess, at the time of a lot of milk (March-July), some that were not immediately sold, were kept in cool cellars, lost in time but not in the minds of those who kept them as treasures. There they would leave them there for then to discover them different, slightly spicy, with a flavor of spices (something so traditional in Portugal).
Fruits of raw sheep's milk curd, by adding thistle (vegetable rennet) this cheese initially with a milky flavor and slightly bitter by the addition of thistle. After prolonged care by the artisans of this team, it becomes a cheese with an intense flavor, with notes of nuts and spices, which revive the memories of the smells of the dry and hot summer of the Beira Baixa sun, which warms our heart, through the mouth.

A cheese with a protected designation of origin (PDO) from this region that is the result of the tradition and know-how of generations.
This raw sheep and goat milk cheese proves that there are connections that create something greater than the sum of its parts.
The milk that makes up this cheese comes from sheep and goats that graze side by side in the valleys and hills of this land bathed by the same sun and the same clear water, giving rise to a unique cheese in its flavor.
These cheeses pair well with pumpkin jam and red wine.

A cheese with a protected designation of origin (PDO) from this region that is the result of the tradition and know-how of generations.
Raw sheep's milk cheeses are very important in this region, due to the large pastures in the lower areas of Cova da Beira (name that denotes its less accentuated slope), there the sheep of the Breeds (Marino da Beira Baixa) feed on the natural vegetation to give the richest milk.
This milk curdled by the addition of an infusion of thistle (vegetable origin) gives rise to a soft cheese with a milky flavor. Its slightly curved appearance denotes its softer mass, reminiscent of the mountains and mountains of this region..
These cheeses pair well with pumpkin jam and red wine.

A cheese with a protected designation of origin (PDO) from this region that is the result of the tradition and know-how of generations.
The Picante cheese came about by mere chance, when in the past the only ways to preserve it were olive oil and salt, it was decided that the best way to preserve the cheeses was by adding salt in large quantities. In the past, shepherds preserved the cheese with the addition of a lot of salt, and kept it in a cool place, in dark cellars, placed in piles lying on the rye straw floor, which kept it cool and airy. They remained that way for a long time, while the salt and enzymes in the straw worked the cheese.
After half a year the cheese had turned to salt, tasting like spicy (as if Piri-piri had been added).
Today, in clean facilities with high food safety, the cheese continues to be placed in straw (washed, sterilized and oven dried) so that its flavor remains as characteristic as possible.
When we taste it, each thin slice of that cheese spurs us on, waking up all our senses.

All the information you need to get to know BeiraLacte cheeses

Description of your cheese of choice.

Types of milk and method of manufacture.

The guarantee of the authenticity of our PDOs

All the information about what our cheeses contain and the conservation recommendations.

Use your smartphone and watch our presentation video.

The Beiralacte have a team of 31 employs, who work daily in the sole purpose of producing quality cheeses and well treat the customer.

Side by side with the manager, works 2 people associated with the collection of milk, that daily performs this task collecting milk in the producers of the surrounding region; 18 collaborators involved in the manufacture and curing of the cheese; 5 responsible for production and quality management and 6 employees associated with commercial and sales , which includes the worker in charge of Marketing.

Employees are aged between 18 and 58 years, a cohesive team with already many years of cooperation, some of which remain in the company since its establishment.

About 25% of staff have higher qualifications, raising responsibilities, which reflect the knowledge acquired in schools and in everyday life, by sharing with thus who have the know-how. 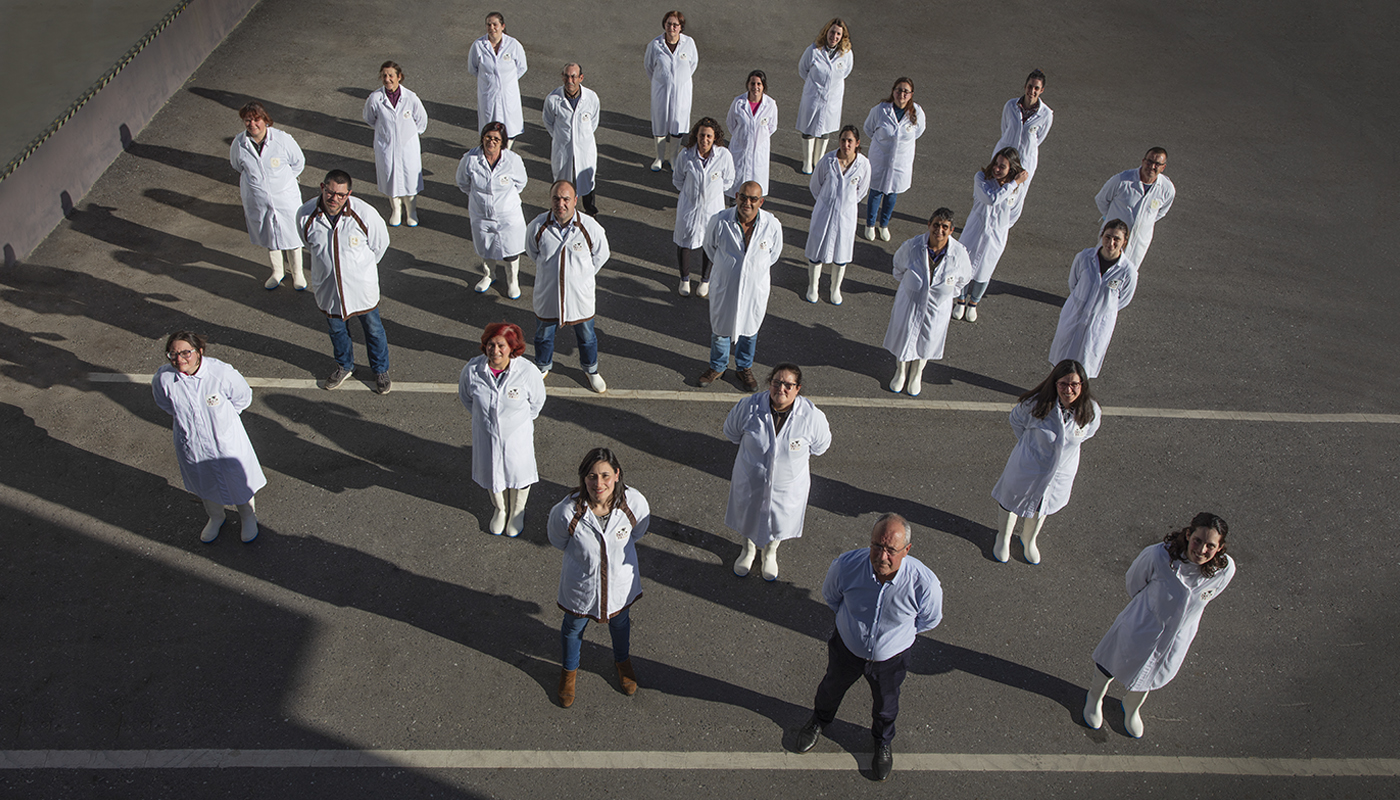 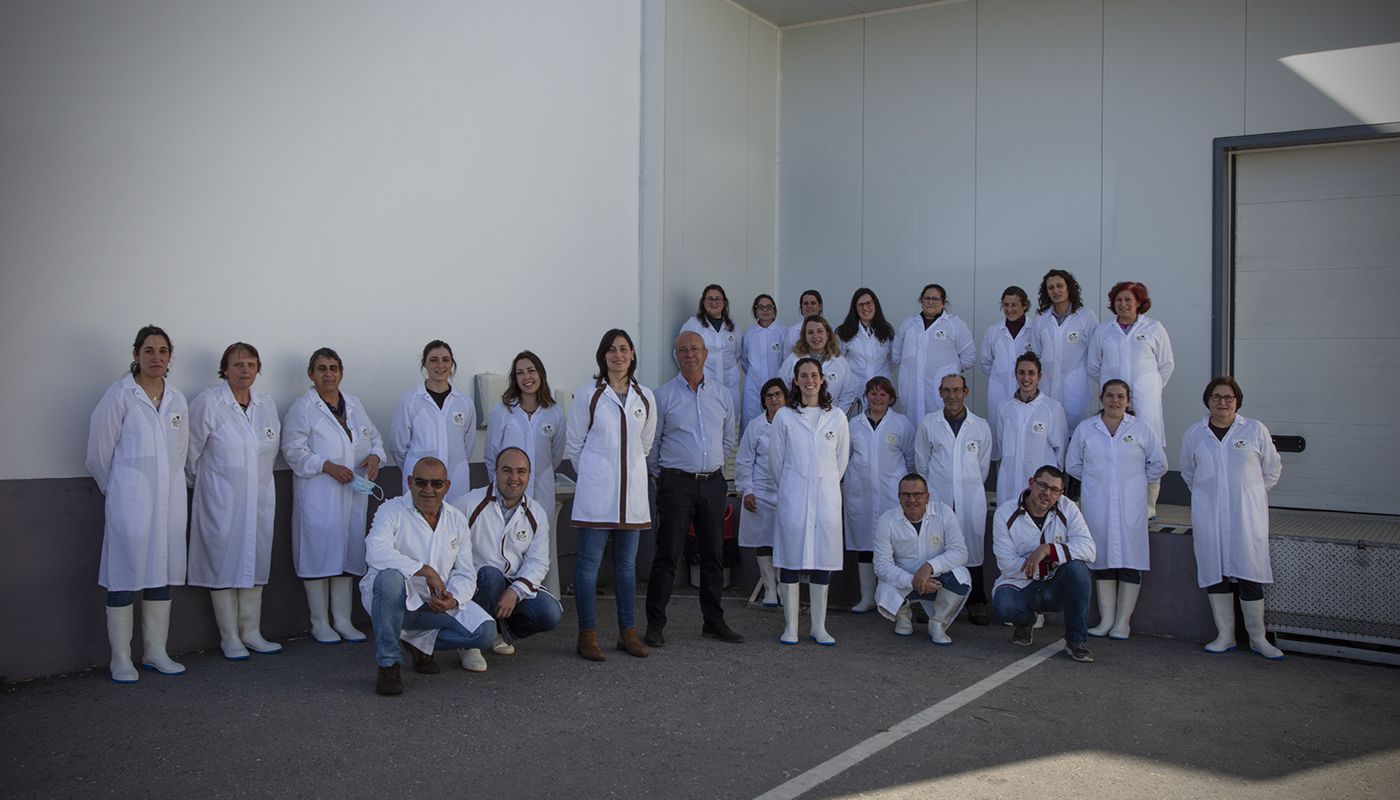 The numerous prizes awarded in some of the most important national and international competitions of cheese attest BeiraLacte excellence. 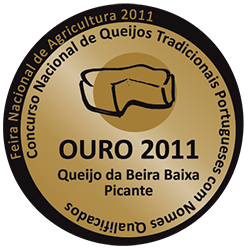 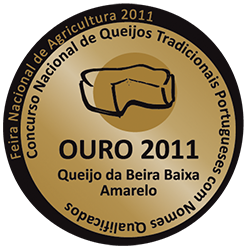 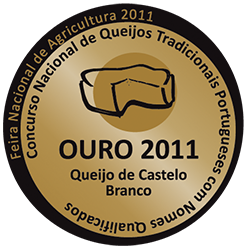 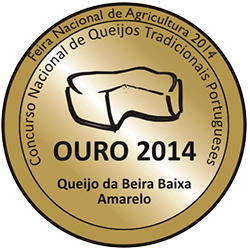 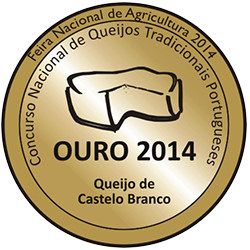 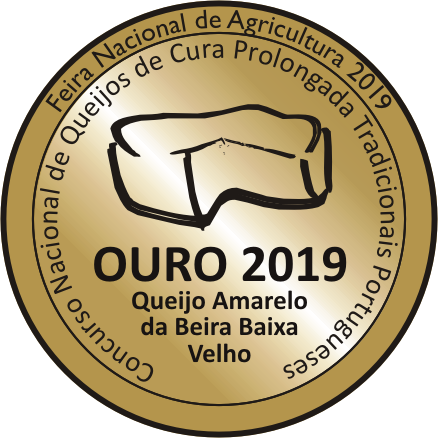 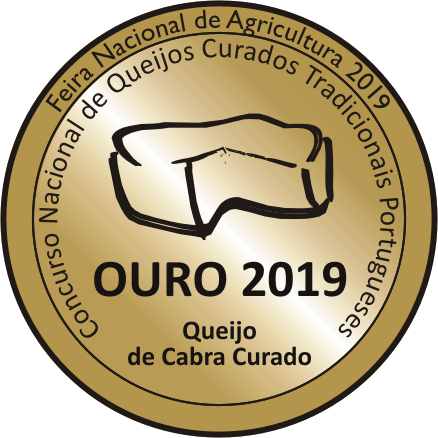 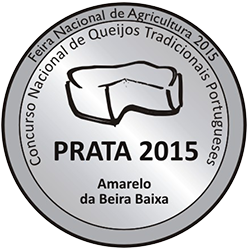 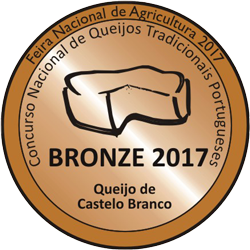 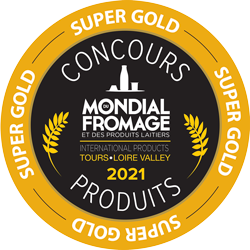 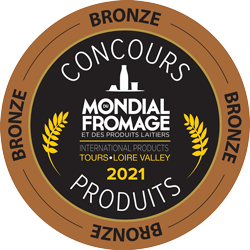 This site uses cookies for the proper functioning of the site and to optimize your browsing experience. To learn more about the use of cookies or how to manage or disable them on this device please consult the Cookies Policy.